Posted on November 11, 2010 by Panajachel Chamber of Commerse Online

Fishermen, cleanup workers and residents of Gulf Coast believe they are being sickened by toxic chemicals from BP spill.

“I’ve been vomiting, my head feels like it’s going to explode, diarrhoea, and I keep passing out,” Miller, who worked in BP’s so-called Vessels of Opportunity (VOO) oil response programme, said from his bed at Biloxi Regional Hospital on November 5.

Four days earlier, Miller, his wife and dog were boating on the Gulf of Mexico near one of Mississippi’s barrier islands when all three of them fell ill.

“My wife and I felt the chemicals immediately and my dog even started hacking like he was trying to cough up a bone,” Miller explained.

Later that day he began vomiting and experiencing a severe headache and diarrhoea. Then on November 4 he passed out in the shower. Concerned by his uncontrollable nausea and bleeding in his esophagus, his wife took him to the emergency room.

“The doctor just told me I have acid reflux,” Miller, who has been experiencing many of his symptoms since joining the VOO programme, said. “They don’t even know what this is. I told him I needed to be tested for toxic chemicals. I’m in a major hospital and they are telling me they don’t know what this is.”

Miller’s friend, Chris Balius, also a former VOO worker, was in a boat near Miller’s on that same day out on the Gulf.

“I was hit by it too,” Balius explained. “Headache, nausea, diarrhoea, and now my eyesight is failing. When I was in the VOO programme, I had to let someone else run my boat after 30 days because I got so sick. Every time I go on the water I get sick, so I no longer go, and don’t allow my family to go anymore.”

Joseph Yerkes, who lives on Okaloosa Island, Florida, was in BP’s VOO programme for more than two months, during which time he was exposed to oil and dispersants on a regular basis.

“I worsened progressively,” Yerkes said. “Mid-September I caught a cold that worsened until I went to a doctor, who gave me two rounds of antibiotics for the pneumonia-like symptoms, and he did blood tests and found high levels of toxic substances in my blood that he told me came from the oil and dispersants.”

Increasing numbers of people across the Gulf Coast are suffering from symptoms that doctors and toxicologists are linking to chemicals from the BP oil disaster that began last summer when the blowout of the Macondo well gushed at least 4.9 million barrels of oil into the Gulf.

BP responded by using at least 1.9 million gallons of toxic dispersant to sink the oil.

“The dispersants used in BP’s draconian experiment contain solvents such as petroleum distillates and 2-butoxyethanol,” Dr. Riki Ott, a toxicologist, marine biologist and Exxon Valdez survivor, said. “People are being made sick in the Gulf because of the unprecedented release of oil and toxic chemicals from this past summer in response to BP’s disaster.”

Ott is frank in her assessment of the ongoing health crisis residents are facing in the Gulf.

“It’s clear to me there are four to five million people, from Terrebonne Parish in Louisiana, through the big bend of Florida, who are being exposed to dangerous levels of dangerous chemicals,” she said.

“Oil and dispersants are in the air and water, that are at levels that exceeded the acute or intermediate threshold that federal agencies have declared to be safe. Just speaking of air exposure, and there are scientific papers on this, if you release one molecule of toluene, at three metres above the ground, into a six kilometre wind, that molecule, uninterrupted, will travel 34 kilometres.”

Charter plane pilots who have conducted Gulf over-flights have reported having to wipe an oily, orange film from their plane afterwards. Following this, the skin on their hands peeled off. “The oil and dispersants are in the air and in the rain and are making people sick,” Ott said. “These Volatile Organic Compounds (VOCs) are there, and at dangerous levels.” 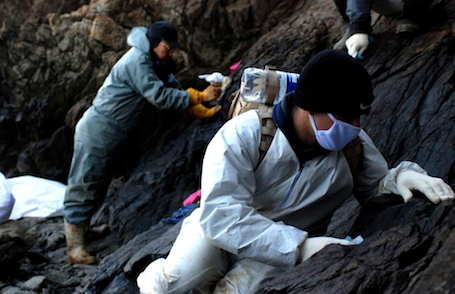 “People experiencing these symptoms, that is their body trying to tell them they are in a dangerous situation,” explained Ott. “Exposure to dispersants makes everything worse because they affect the CNS more. They act as an oil delivery system, bringing the oil deeper into the body.”

The BP workers and community members had shockingly high levels of toxic chemicals like Ethylbenzene and Hexanes in their bodies, with one 48-year-old male showing the highest concentrations.

“I’m that 48-year-old male,” Gregg Hall, from Pensacola, Florida, said. “I’ve been nauseas and had headaches, burning eyes and numb feet for months. The bays here are now toxic. It’s all around us, yet the government keeps telling us everything is fine.”

According to Ott, doctors along the Gulf coast are treating the symptoms of the widespread exposure to BP’s toxic chemicals with antibiotics.

“You can’t take antibiotics and expect to get better,” she explained. “Environmental medicine is what these people need, but it is hard to find that in the Gulf, where the oil and petrochemical industry reign supreme and medical doctors there are reluctant to call a spade a spade.”

Dr. William Rea is a thoratic and cardiovascular surgeon who specialises in the environmental aspects of health and disease. He founded the Environmental Health Center in Dallas, Texas in 1974 and has been treating people who have been exposed to toxic chemicals in crude oil and dispersants for years.

“We first try to eliminate people’s symptoms, and that is organ specific,” Rea explained at his clinic, which is one of the oldest and most advanced centres in the world for addressing health as it relates to the environment. “We try to lower their toxic load by giving them intravenous nutrients, oral nutrients, sauna, and have them live in quarters that are less polluted, eat organic food and have them get safe drinking water.”

Rea has treated many people from the Gulf that have been made sick by BP’s toxic chemicals.

“I have multiple concerns now about people in the Gulf being affected by these chemicals,” he said. “First, they are all fatigued and not able to work. When your muscles are all fatigued and tired, it’s hard to function. People are getting cloudy brains, others are having heart problems because of the chemicals. Others have broncho-spasm and asthma from this. Others bloat and get sleepy after eating, diarrhoea, constipation, irritable bowel syndrome and other gastrointestinal problems.”

Donny and Angel Matsler, from Dauphin Island, Alabama, recently arrived at Rea’s centre for treatment. Donny has been suffering symptoms he attributes to BP’s toxic chemicals for months.

“I started to vomit brown, and my pee was brown also,” Donny said. “Sometimes I kept that up all day. Then I had a night of sweating and non-stop diarrhoea unlike anything I’ve ever experienced.”

Donny, a Vietnam veteran who had pre-existing health issues before the BP disaster began, believes his condition has worsened exponentially because of ongoing exposure to BP’s chemicals as a result of living on the coast.

“We have many friends breaking out in rashes, having severe breathing problems and other symptoms,” Angel explained.

“It would help if they had some doctors on the coast that knew about all of this, so they could do some preventive work and maybe head some of this off,” Rea said of what he sees as a lack of expertise among doctors in the Gulf. “And folks who are heavily affected, like Donny and Angel, you have to get them out of the area to treat them.”

Lynn Ferguson lived in Palatka, Florida, with her husband Rod Norman until July, when they decided to move to Montana after suffering symptoms they attribute to the BP oil disaster.

“I lost my voice in June and my breathing got much worse,” said Ferguson. “I was having heart palpitations, coughing, painful lungs, shortness of breath, lethargy, and it all kept worsening. Rod flew to Montana in June and was there 10 days, and had immediate relief. But when he came back to Florida he got sick again.”

Ferguson said that after learning that her symptoms were being reported by others across the Gulf, “I took money out of my retirement and we moved to Butte, Montana. My breathing is much better and 90 per cent of my voice has come back”.

“Sinus infections, ear infections, chest congestion, burning eyes, I kept going to the doctor for these, and he put me on all kinds of antibiotics and it didn’t clear anything up,” Norman said. “He kept trying different antibiotics but it never really worked. I got well as soon as I got out of the state.”

Yerkes, the former VOO worker, said that his doctor, a general physician with a background in toxicology, instructed him to begin a nutritional detoxification programme in order to “lower the levels of pollution in the blood”. The doctor also told Yerkes to move away from the Gulf Coast.

“He was very clear about his diagnosis, explaining how dangerous and damaging these chemicals can be to our bodies, and concluded that all of my symptoms are due to the elevated, abnormal levels of chemicals present in my system from the Gulf oil spill,” Yerkes said. “The doctor who did my blood work said that the results showed that I have oil in my blood. I have the solvents in my bloodstream.”

Yerkes is looking for somewhere to move to as he continues his detoxification programme at his home in Florida.

“Every morning I wake up with nausea, I have blurred vision, a low grade fever comes and goes, and now I’m having anxiety attacks, which I’ve never experienced before,” he said. “I’m having symptoms unlike anything I’ve ever experienced, and some of them scare me to death.”

Yerkes is struggling with the prospect of leaving the Gulf Coast, even though he feels that it is the only way he can regain his health.

“It deeply saddens me after living on or around the Gulf my whole life, making a living from it, and experiencing the serenity and contentedness it has always brought to me,” he said.

“But now I have to leave and start my life over. I know I am not the only one, and there are many much worse off than me, and I pray for everyone on the Gulf Coast to be oil and dispersant free. Nobody deserves this poisoning of our bodies, it is hell feeling like you’re being destroyed from the inside out from exposure every day.”