Posted on February 12, 2011 by Panajachel Chamber of Commerse Online

Protesters Break On Through in Algeria 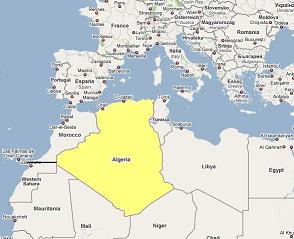 Pro-democracy demonstrators, inspired by the Egyptian revolution, ignore official ban and march in the capital Algiers.

Algerian security forces and pro-democracy protesters are clashing, as demonstrations got underway in the capital Algiers on Saturday.

At least 2,000 protestors were able to overcome a security cordon enforced around the capital’s May First Square, joining other demonstrators calling for reform.

Earlier, thousands of police in riot gear were in position to stop the demonstrations that could mimic the uprising which forced out Egyptian President Hosni Mubarak.

Security forces have closed all entrances to the capital and already arrested hundreds of protesters, sources told Al Jazeera.

At the scene of the protests, blogger and activist, Elias Filali, said human right’s activists and syndicate members were among those arrested.

“I’m right in the middle of the march,” he told Al Jazeera. “People are being arrested and are heavily guarded by the police.”

Officials banned Saturday’s opposition march, but protesters were determined to see it through.

Filali said the demonstrators were determined to remain peaceful, but he added that the police “want the crowd to go violent and then get them portrayed as a violent crowd”.

Protesters are demanding greater democratic freedoms, a change of government, and more jobs.

“It wasn’t even an organised demonstration. It was spontaneous. It was an explosion of joy,” he said.

Many are left wondering which country could be next in a region where a flammable mix of authoritarian rule and popular anger are the norm.

“The timing is absolutely perfect. [Mubarak’s departure] couldn’t have come at a better time,” Filali told Al Jazeera ahead of the protests.

“This is a police state, just like the Egyptian regime [was],” Filali said, adding that Algeria’s government was “corrupt to the bone, based on electoral fraud, and repression”.

“There is a lot of discontent among young people … the country is badly managed by a corrupt regime that does not want to listen,” he added.

Said Sadi, the RCD leader, had said earlier that he expected around 10,000 more police officers to reinforce the 20,000 that blocked the last demonstration on January 22, when five people were killed and more than 800 hurt.

Police presence is routine in Algeria to counter the threat of attacks by al Qaeda insurgents. But Filali called the heavy police presence in the capital on Saturday “unbelievable”.

At May First Square, the starting point for the planned march, there were around 40 police vans, jeeps and buses lined up, Filali said.

At several road junctions, the police had parked small military-style armoured vehicles which are rarely seen in the city. Police standing outside a fuel station, about 2 km from the square, were wearing anti-riot body armour.

The latest rally is being organised by the National Co-ordination for Change and Democracy (CNCD), a three-week-old umbrella group of opposition parties, civil society movements and unofficial unions inspired by the mass protests in Tunisia and Egypt.

Demonstrators have been protesting over the last few months against unemployment, high food costs, poor housing and corruption – similar issues that fuelled uprisings in other north African nations.

Earlier this month, Abdelaziz Bouteflika, Algeria’s president, said he would lift emergency powers, address unemployment and allow democratic marches to take place in the country, in a bid to stave off unrest.

“The regime is frightened,” Filali said. “And the presence of 30,000 police officers in the capital gives you an idea of how frightened the regime [is] of its people.”

Widespread unrest in Algeria could have implications for the world economy because it is a major oil and gas exporter, but many analysts say an Egypt-style revolt is unlikely as the government can use its energy wealth to placate most grievances.

Meanwhile, in a statement, rights group Amnesty International said “Algerians must be allowed to express themselves freely and hold peaceful protests in Algiers and elsewhere”.

“We urge the Algerian authorities not to respond to these demands by using excessive force.”

The government said it refused permission for the rally for public order reasons, not because it is trying to stifle dissent. It said it is working hard to create jobs, build new homes and improve public services.

Other Arab countries have also felt the ripples from the revolts in Egypt and Tunisia.

In Yemen, President Ali Abdullah Saleh promised opponents he would not seek a new term.

The Bahraini government has also made several concessions in recent weeks, including promising higher social spending. Activists there have called for protests on February 14, the tenth anniversary of Bahrain’s constitution.

Editors note: Algeria’s reserve currency is the dollar. The fossil fuels energy sector is the backbone of Algeria’s economy, accounting for roughly 60% of budget revenues, 30% of GDP, and over 95% of export earnings. The country ranks fourteenth in petroleum reserves, containing 11.8 billion barrels (1.88×10^9 m3) of proven oil reserves with estimates suggesting that the actual amount is even more. The U.S. Energy Information Administration reported that in 2005, Algeria had 160 trillion cubic feet (4.5×10^12 m3) of proven natural gas reserves,] the eighth largest in the world. Average annual non-hydrocarbon GDP growth averaged 6 percent in 2003-2007, with total GDP growing at an average of 4.5 percent during the same period due to less buoyant oil production in 2006-07. External debt has been virtually eliminated, and the government has accumulated large savings in the oil stabilization fund (FRR). Inflation, the lowest in the region, has remained stable at 4 percent on average for 2003-07.

Algeria’s financial and economic indicators improved during the mid-1990s, in part because of policy reforms supported by the International Monetary Fund (IMF) and debt rescheduling from the Paris Club. Algeria’s finances in 2000 and 2001 benefited from an increase in oil prices and the government’s tight fiscal policy, leading to a large increase in the trade surplus, record highs in foreign exchange reserves, and reduction in foreign debt.

The government’s continued efforts to diversify the economy by attracting foreign and domestic investment outside the energy sector have had little success in reducing high unemployment and improving living standards, however. In 2001, the government signed an Association Treaty with the European Union that will eventually lower tariffs and increase trade. In March 2006, Russia agreed to erase $4.74 billion of Algeria’s Soviet-era debt during a visit by President Vladimir Putin to the country, the first by a Russian leader in half a century. In return, president Bouteflika agreed to buy $7.5 billion worth of combat planes, air-defense systems and other arms from Russia, according to the head of Russia’s state arms exporter Rosoboronexport.

Algeria also decided in 2006 to pay off its full $8bn (£4.3bn) debt to the Paris Club group of rich creditor nations before schedule. This will reduce the Algerian foreign debt to less than $5bn in the end of 2006. The Paris Club said the move reflected Algeria’s economic recovery in recent years.