Posted on March 4, 2011 by Panajachel Chamber of Commerse Online 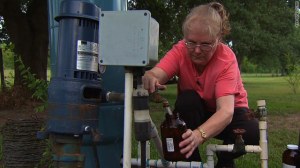 SMALL trucks noisily patrol the beach behind Steve Fourrier’s home in Grand Isle, Louisiana. From his deck he watches them dump sand into screening machines. Crews follow close by, dragging rakes along the beach.

Fourrier wonders when his grandson will be able to play in that sand again, and if he’ll be able to put out his crab traps this northern summer. Most of all he wonders when, or if, Grand Isle will ever be the same again.

”The only answer you can have any certainty of,” he says, ”is that absolutely nobody knows.”

Ten months after BP’s Deepwater Horizon rig exploded and began spewing almost 800 million litres of oil into the gulf, and seven months after the well was capped, Elmers Island beach, like many, is still closed. Camardelle’s Seafood, where President Barack Obama ate on his visit last June, has been closed since July. It has quietened down a lot since the height of the clean-up, ”when BP took over the world”, as Grand Isle ports commissioner Wayne Keller puts it, ”but we’ve still got oil in the sand and tarballs washing up on the beach”.

Michael Boatright, 53, has run an aquaculture and fish-farming business in New Orleans since 2004. ”I was on track for a great year,” he says, ”but now all my customers are buying from Florida.” He has sold everything from farm equipment to his watch to pay his bills. His phone has been cut off and his power will go next. ”Christmas was terrible,” he says. ”I couldn’t buy my grandson anything, and he was asking if Santa thought he’d misbehaved.”

Boatright has been diving in the gulf since he was 17. From last June to September, he dived as usual about once a week, in areas the federal government had declared safe and open for fishing. ”We didn’t think there was much risk,” he says. ”The water looked good, looked clean.”

In September he started experiencing dizziness and blurred vision, then vertigo and palpitations. By October he was passing blood and had severe nosebleeds. ”At first I was in denial,” he says. ”I’m broke now, and like most fishermen don’t have healthcare. But I was a paramedic for 25 years and I knew this was serious and abnormal.”

Last month he had his blood tested. The results showed extremely high levels of chemicals such as xylene and ethylbenzene, highly toxic carcinogens found in crude oil.

According to chemist Dr Wilma Subra, whose lab ran the test on Boatright and two of his diving partners, all three had the same results, and the mix of chemicals was an ”exact fingerprint” for those identified when they tested samples of the BP crude erupting from the ocean floor.

Subra, a renowned environmental toxicologist with more than 30 years’ experience, has been dubbed ”a modern-day Erin Brockovich” by CNN. She and the Louisiana Environmental Action Network, which has been working locally since 1986 with more than 100 community organisations, have been conducting toxicity tests on clean-up workers, fishermen and coastal residents experiencing symptoms like Boatright’s. Results like his are increasingly common, she says. One person had benzene levels 36 times higher than normal.

The National Institutes of Health are researching the spill’s health effects, financed with $10 million each from the federal government and BP, but Subra says the study does not include the broader population, and more importantly, does not offer care to those being studied.

According to an economic impact report published by the Greater New Orleans Economic Alliance, ”the wave of self-reported health impacts of chemical exposure recalls the plight of the 9/11 first responders who also weren’t required to wear respirators”.

”They won’t be provided with insurance to cover the long-term effects that we’ll see transpire,” it says. ”We’re also concerned at the lack of health facilities in coastal communities, and professionals trained and qualified to diagnose or treat chemical exposure.”

The worst-hit were the clean-up workers, says Subra: ”And when they got sick many were just laid off.”

Subra, who has met Obama administration officials and testified to Congress on the spill, worries about long-term genetic and reproductive problems associated with these chemicals. ”Would they even be attributed to the spill?” she asks. ”I’m afraid we’re just not going to know.”

Questions and fears like this loom over the gulf, but the more immediate problem for most is finding work. Louisiana has lost more than 25,000 jobs since the closure of federal fishing grounds began last May. Many who worked in the spill recovery effort are now unemployed again.

”Savings are gone and stress levels are rising,” says Iray Nabatoff, director of the Community Centre of St Bernard. ”People don’t have their lives back and there’s no certainty as to when or if that will happen.”

The United Commercial Fisherman’s Association president, George Barisich – unemployed himself for the first time – says this year’s oyster catch is down 85 per cent. ”It’s worse than Katrina,” he says. ”Even if the seafood recovers, will people buy it?”

Subra’s team has sampled soils and sea life throughout areas of the gulf deemed unaffected or ”cleaned”, and found dangerously high levels of petroleum hydrocarbons. ”What happened with the Valdez is what we have to look forward to here,” she says. Herring populations, for example, didn’t vanish until four years after the Exxon Valdez spilt more than 40 million litres of oil into Alaskan waters in 1989. They have not returned. ”The contamination, the die-off, then the accumulation up the food chain,” she says. ”It’s not a pretty picture.”

Some are more optimistic. Dr Chris Reddy is an oil spill expert and senior scientist at the Woods Hole Oceanographic Institution, which discovered the 35-kilometre ”plume” last August. ”The gulf’s like someone who’s been in a bad car accident,” he says, ”with lots of different wounds, small cuts to broken hips. A spectrum of injuries and recovery times. Some species, some places, may be fine in a year or two, but some will take much longer. We just don’t know yet. The main thing is to diligently monitor how our patients are recovering.

”Potentially, the species impacted the most was the mental health of the people of the Gulf Coast.”

By January, New Orleans Catholic Charities’ crisis counsellors had provided counselling, including suicide intervention, to more than 13,000 people. Issues with the BP claims process have compounded the problem. As of February 14, 489,000 claims had been filed for BP’s $US20 billion compensation fund. According to the company’s figures, fewer than 169,000 of those claims had been paid, totalling less than $3.4 billion.

And for those forgoing the courts in the hope of a quick payout to keep them afloat, ”the claims process is a card game,” Barisich says, ”and we’re playing some serious poker here”.

”Lots are in the paid column, but they haven’t been paid right,” he says. ”One of my deckhands – he has three kids – got a few cheques in June and nothing since. Another’s been flat denied. They don’t have to give a rejection reason.”

According to Emily Danielson of the Greater New Orleans Economic Alliance, ”the main problem is the number of legitimate claims being denied”.

”It’s like going through an [Internal Revenue Service] audit,” says Boatright, who has also been denied. ”I want to work, not rely on them, but I can’t even meet their standards for a subsistence cheque.”

BP is paying the law firm of Kenneth Feinberg, the fund administrator, a flat fee of $850,000 a month, but neither will release the full compensation details. In February, the processing of claimants continued to slow and the rejection rate continued to rise, from under 5 per cent in October to 55 per cent.

Despite the onslaught of BP ads claiming it is ”making it right” – it tripled its average monthly advertising outlay during the spill – the equivalent of five Valdez spills still remains in the gulf, according to government estimates, unaccounted for.

”There are still areas I wouldn’t put my boat,” says Barisich. Like many scientists, he has grave concerns about the unprecedented 7 million litres of chemical dispersants used. ”Why is it OK here if it’s banned in Europe? Instead of sopping up the oil, they buried it, hid the evidence, and that exacerbated all the problems.”

According to BP spokeswoman Hejdi Feick, ”dispersants were only used under the approval and direction of the Coast Guard and the Environmental Protection Agency”.

In a study released on January 26, Woods Hole chemist Dr Elizabeth Kujawinski said: ”We found that the dispersant stayed in the deep ocean and did not degrade. And that was somewhat surprising.” She says more research is needed. ”Does adding dispersants increase the toxicity of the crude itself? Will it have impacts on deep-water fish like tuna?”

A third of America’s seafood comes from Louisiana, and much of the talk is about its safety. The National Oceanic and Atmospheric Administration (NOAA), which first tested gulf seafood by a ”sniff test” and in September declared it safe, later modified its statement to say only that the level of toxins was below agency danger levels. But their guidelines established for the spill are based on consumption rates far below those of coastal communities, says a National Resources Defence Council study, which concluded gulf residents eat three to 12 times the NOAA estimates.

”Gulf seafood is the most tested in the US,” says NOAA spokesman Ben Sherman. ”We’re monitoring all points from fishing boats to loading docks to restaurants.”

But Subra’s team has tested oysters, shrimp, crabs and fish that did not look or smell oiled, and found toxins consistent with crude oil. Some oysters had petroleum hydrocarbon levels as high as 1.25 per cent. ”The wetlands are the nursery for all the seafood in the gulf,” she says, ”and with all the oil in them now, it could be generations before they recover.”

The President’s National Oil Spill Commission, testifying before Congress this month, recommended the EPA establish more thorough protocols to monitor health effects of major spills. It also urged Congress to devote 80 per cent of the Clean Water Act penalties – which could be as high as $20 billion if gross negligence is established – to restoring the delicate wetlands lining the Gulf Coast, already vanishing at the rate of a football field every 38 minutes. Commission co-chairman William Reilly says ”they are likely to continue silently washing away unless decisive action is taken”.

It also warns that unless industry practices and government regulation improve, another disaster is inevitable.

Reddy, who testified to the commission and Congress, says ”they did a good job”. ”But what’s important is – what happens with the recommendations in the report now?”

Back in Grand Isle, Fourrier laments the disappearance of media coverage since July. ”They think ‘it’s capped, it’s over’,” he says. ”But it’s clear here that it’s far, far from done. At least with Katrina you could see the damage. With this we have no idea what’s hit us yet, and won’t, for years to come.”