Posted on March 10, 2011 by Panajachel Chamber of Commerse Online 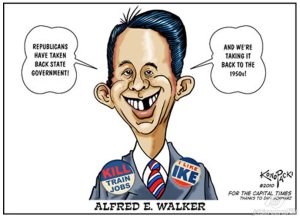 Republicans voted 18-1 in a hastily arranged special conference committee. None of the Senate Democrats were present.

The Senate requires a quorum to take up any measures that spend money. But Republicans on Wednesday split from the legislation the proposal to curtail union rights,and a special conference committee of state lawmakers approved that bill a short time later.

The lone Democrat present on the conference committee, Rep. Tony Barca, shouted that the surprise meeting was a violation of the state’s open meetings law but Republicans voted over his objections. The Senate then convened within minutes and passed it without discussion or debate.

Spectators in the gallery screamed “You are cowards.”

Before the sudden votes, Democratic Sens. Bob Jauch said if Republicans “chose to ram this bill through in this fashion, it will be to their political peril. They’re changing the rules. They will inflame a very frustrated public.”

“The Senate Democrats have had three weeks to debate this bill and were offered repeated opportunities to come home, which they refused,” he said in a statement. “In order to move the state forward, I applaud the Legislature’s action today to stand up to the status quo and take a step in the right direction to balance the budget and reform the government. The action today will help ensure Wisconsin has a business climate that allows the private sector to create 250,000 new jobs.”