Posted on May 20, 2011 by Panajachel Chamber of Commerse Online 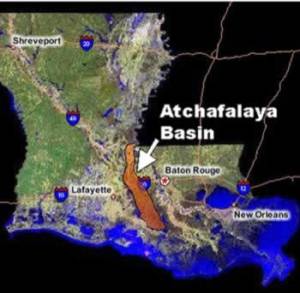 The Army Corps of Engineers opened another bay on the Morganza Spillway Wednesday — diverting more water off the Mississippi through the bayous and rivers of Louisiana’s Atchafalaya Basin.

The corps says it will divert as much water as necessary to keep the Mississippi no higher than 45 feet as it passes through Baton Rouge.

But some of that water might actually be welcome.

Few people pay closer attention to water conditions in the Atchafalaya Basin than those who make their living catching crawfish.

Lee Wisdom and other craw fishermen in St. Martin Parish are launching their boats, not off the ramps, but from the levee. They can’t get to the ramps. Water has already risen several feet on Bayou Benoit. And water from the Morganza Spillway hasn’t even reached this area yet.

Mike Bienvenu, head of the Louisiana Crawfish Producers Association, says he’s not sure whether the coming flood will improve the crawfish crop or not.

“We don’t like high water. High water is not good. We need good water. All we need is three or four feet [of] water to crawfish in, that’s all we need,” he says.

Craw fishing has declined here in recent years. Bienvenu and others blame the web of canals and levees that oil and gas companies have put in the Atchafalaya Basin, keeping fresh water from some bayous.

When the high water hits this area in coming weeks, it will flush out stagnant ponds with fresh water full of oxygen and sediment. Harold Schoeffler, who has fished these waters his whole life, says that’s bound to improve things in the basin.

As water washes up on levees and other formerly dry areas, he says long-dormant crawfish will come out of the mud and start breeding.

“So you get this phenomenal production,” Schoeffler says. “And then shrimp. This is an estuary where shrimp from the Gulf come into this system and reproduce. So you have this phenomenal amount of nutrients and water that’s going to cause an enormous growth of shrimp that feeds speckled trout and redfish and flounder. And the whole thing just takes off.”

Short term, the high water is threatening a huge animal population including as many as 150 black bears, plus many deer and smaller mammals. Schoeffler, who is the longtime chairman of the Sierra Club in this part of Louisiana, says, for the most part, the animals should do fine. Water is rising slowly, and he says, even at the crest, there will be plenty of high ground in the basin.

A Natural Part Of The Basin Ecology

It might be surprising that, although 1.5 million cubic feet of water per second may soon be released into this basin, those living here are remarkably undisturbed. That’s in part because flooding is a natural part of this area’s ecology.

This flood event, the largest since 1973, will reshape the basin — filling in some swamps with sediment and turning them into hardwood forests.

For Louisiana’s long-eroding coastal wetlands, though, this flooding is a good thing.

“In the central part of the coast, because of the Atchafalaya, we’re going to definitely be creating new marshes. We’re going to be rejuvenating a huge area of marsh, so a lot of benefits,” he says.

Paul Kemp of the National Audubon Society agrees. Unfortunately, he says, the place where new sediment and new marshes are needed most desperately — below New Orleans at the mouth of the Mississippi — won’t be helped by the flood. Because of efforts to keep the Mississippi wide open for navigation, any sediment flowing down the river is likely to be dredged and dumped, not in coastal areas, but off the Continental Shelf.

“And I would have loved to say, ‘This was the event we were waiting for. We were prepared and we were able to do 50 years of restoration in one year.’ I can’t say that today,” Kemp says.

Kemp, van Heerden and others active in coastal restoration, hope this event will persuade the Army Corps of Engineers and other public agencies to take steps allowing not just the Atchafalaya but also the Mississippi to actually benefit from the flood.