Posted on June 13, 2011 by Panajachel Chamber of Commerse Online 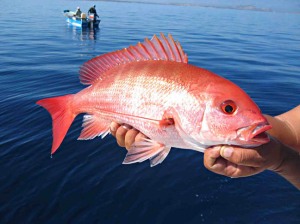 Shortest red snapper season in store for Gulf of Mexico

The first of June is opening day of the recreational red snapper season in the Gulf of Mexico. That’s also the day after the Gulf’s recreational season on greater amberjack closed for two months.

Langlois is a die-hard snapper fisher, a man who’s seen his passion limited by hurricanes and oil disasters in three of the past five years.

This year, he and other deep-water Gulf fishermen are facing the shortest recreational red snapper season since the federal government’s fishery managers determined the species was being overfished — meaning catches were outpacing the species’ ability to restock Gulf waters.

Data from the National Marine Fisheries Service indicates red snapper are not overfished, but the recreational season ends at 12:01 a.m. July 18, a 48-day season that belies what recreationals like Langlois have been seeing for two years off the Louisiana coast.

Federal marine biologists said the reason for the shorter season is that the quota is based on pounds, and data shows the average size of red snapper has increased by nearly two pounds during the past two years. While federal managers increased the total catch of red snapper in pounds, the same number in the recreational catch demands a shorter season.

“The good thing about the coming season is that there are a lot of snapper out there. The bad thing is that it’s going to be hard to catch the giant snapper because there are so many of them,” Langlois said.

Langlois is among a handful of folks who consistently show up at rodeos with “giant” snapper. He said he settles for nothing less than a 30-pounder and has rods and reels built to tackle these brutes. He also knows exactly where the big snapper live — in and around rigs and reefs in 150-300-foot depths.

“We learned last year that it’s hard to target the monsters because there’s an overabundance of them,” Langlois said. “When it came to rodeo fishing, it came as a shock to some fishermen that I was releasing 15-pound snapper because that’s not a rodeo fish.

“I was talking to Nick Rauber, the guy who runs the Swollfest Rodeo (June 9-11 on Grand Isle), and he told me he made a dive on a rig and there were so many red snapper they were hitting his camera. He said there were thousands and thousands of them at every rig they went to,” Langlois said. “And there are plenty of snapper at rigs in 50, 60 and 70 feet of water, not just the deep (water) rigs.”

Langlois is a three-time Swollfest red-snapper winner and won the King Fisherman title once when he caught several other sizeable species.

“I’m not looking forward to not being able to catch amberjacks,” Langlois said. “It’s not hard to find them. Before the (2010) oil spill, we were catching them high (near the surface) and on everything. Now that we can’t bring in a couple of them, well, that’s a bad thing.

“I’ve got all my rigs ready and all my back-up equipment is ready, too,” Langlois said. “We just don’t need another disaster to set us back another year.

“I know the Mississippi River is pumping a lot of water, and it will make the water murky,” Langlois said. “It will mess with the coastal fishing, but it won’t have anything to do with my snapper fishing.”

This entry was posted in Red Snapper and tagged Red Snapper. Bookmark the permalink.