Posted on September 30, 2011 by Panajachel Chamber of Commerse Online 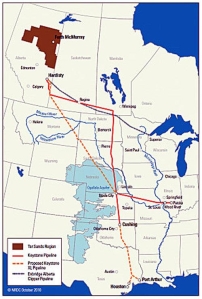 ATKINSON, Neb. — In a sometimes raucous collision of values and political passions, farmers, ranch owners, union laborers, students, politicians and environmentalists descended on a local high school here on Thursday to give representatives of the U.S. State Department — and each other — a piece of their minds on a controversial oil pipeline.

The issue at hand — whether the Obama administration should grant a crucial permit for the so-called Keystone XL pipeline — was distilled at varying moments as a referendum on jobs and dearly needed economic activity; on the fragility of the climate and the importance of a green economy; on landowner rights and the real threat of eminent domain; on states’ rights versus those of the federal government; and even on the primacy of American interests over those of a foreign corporation.

But perhaps more than anything else — at least here atop one of the world’s largest and most pristine aquifers — this was a referendum on water.

“The people of Holt County should not have to sacrifice their drinking water for some short-term economic boosts, or to provide jobs for people living outside the area,” said Cindy Myers, a nurse and lifelong resident of the area, referring to the 150 or so union laborers who had been bused into the meeting from outlying areas, their orange shirts signaling their unified support of the pipeline.

Myers and the vast majority of the nearly 1,000 landowners and residents who crowded into the gymnasium of West Holt High School wore Nebraska red. “A contamination plume in our groundwater could very well destroy the livelihood and jobs of several people around here,” she said.

Daniel Hendrix, of the Pipeliner’s Union local 798 out of Tulsa, Okla., said pipeline projects are always “met with the same opposition and the same ‘what ifs?'” But the odds of accidents can be minimized “through proper planning and advanced engineering.”

The controversial project has become a cause celebre among environmental groups opposed to anything that would further develop Canada’s energy-intensive and environmentally destructive oil resources.

The meeting here was the most recent in a round of public hearings being sponsored by the State Department in states along the proposed route of the Keystone XL pipeline, which would carry heavy crude from on oil patch in the Canadian province of Alberta across the U.S. border in Montana, then wend its way through South Dakota, Nebraska, Kansas and Oklahoma before terminating at refineries on the Texas Gulf Coast.

U.S. federal officials issued a final environmental impact statement on the project at the end of August. The meetings, which will include a final hearing in Washington D.C. on Oct. 7, represent the last opportunity for public debate before the State Department, which has province over infrastructure that would cross an American border, decides whether the pipeline is in the national interest and worthy of a permit.

Should the project get the green light, some observers have wondered just what rights states would have after that.

The question has become particularly acute here in Nebraska, where even the Republican governor, Dave Heineman, has come out in opposition to the pipeline’s proposed route across a portion of the massive Ogallala aquifer — a substantial source of drinking and irrigation water in America’s breadbasket — known as Sand Hills.

The water table beneath the Sand Hills is so close to the surface that the sandy soil is sometimes said to undulate like waves.

Those who depend on the aquifer fear oil leaks, which, no matter how well the system is built, are a functional inevitability. The State Department and TransCanada have said that any spill would cause minimal damage and be quickly contained. Supporters of the pipeline also point out that there are already natural gas and a small number of hazardous liquid pipelines crossing the Sand Hills region — though the Keystone XL would be the first to carry oil.

Critics question how quickly a spill could be addressed in some remote areas — and how well officials and industry analysts really understand the fluid dynamics of the aquifer, which they say could disperse spilled oil for miles. They also argue that it’s not just any oil that would flow through the pipeline, but rather a thick from of crude called bitumen that is diluted with benzene and a variety of other potentially toxic additives.

Even so, many of the citizens gathered at Thursday’s meeting said they supported the pipeline — they just wanted it moved.

“I am not opposed to jobs,” declared Nebraska State Sen. Annette Dubas. “But I am opposed to the route it will take through Nebraska’s most sensitive ecological area.”

James Osborne, a representative of the Teamsters Local 554 out of Omaha, agreed. “These pipe-fitters are as good as gold,” he said, “but I can’t sell out the Ogallala aquifer.”

The crowed erupted in applause.

The State Department has issued mixed signals on where its authority ends. In its final environmental assessment of the proposal, the department noted that many alternate routes were submitted by TransCanada, but the route through the Sand Hills was the least destructive. Yet it has also asserted in public statements that its power does not extend to siting. A Congressional Research Service report on the Keystone XL proposal, published at the end of August, stated, “The federal government does not exercise siting authority over oil pipelines.”

The perceived confusion prompted Heineman to tell the Omaha News-Herald on Wednesday that he wasn’t sure what authority Nebraska had to force a re-routing of the line should the State Department issue a permit.

Myers and other critics, who say Nebraska’s right to determine the pipeline’s route within its borders is clear, called that waffling. “I’m afraid that he’s backing off his opposition,” Myers said, “and that always makes me wonder if politics is at play.”

Unlike neighboring Montana and South Dakota, Nebraska lacks specific laws regarding pipeline siting, though several state lawmakers have called for a special session of the legislature to pass provisions ahead of any State Department decision, which is expected before the end of the year.

“This is about Nebraska water, which is our most important resource in this state,” said Democratic State Senator Ken Haar.

A TransCanada representative, Shawn Howard, said such a move would send a chilling message to companies seeking to do business in Nebraska.

“It suggests that they’re going to change the rules in the middle of the game. Moving the pipeline is not really an option,” he said. “You can’t go around the aquifer; it covers seven states.” Howard also said he believed that local residents were being stirred and driven by well-organized outsiders bent on frustrating all oil interests — particularly those tied to the tar sands.

TransCanada long ago issued orders for pipeline and other equipment — rolling the dice in anticipation of approval. Some of that material has already been delivered, and preliminary work is already being done at the Hardisty terminal in Alberta.

“Are we confident that we’ll win approval? Yes,” Howard said. “Be we’re also not at the finish line.”

When asked if legal action was an option should things not go TransCanada’s way, Howard said, “I don’t know. I’m not a lawyer.”